Today my whole town got word that a powerful man named Cromwell was coming with his army,

The elders say that he has already massacred Wexford and Drogheda.  Also yesterday Aodh Dubh arrived with his army to help fight back. Aodh Dubh is a famous Irish commander who has fought in France and in Spain. But I don’t think that we need his help Cluain Meala is the strongest town in Ireland!

At least something good will come out of this, my mom said that she would give me a couple of bob to go out and get some fresh water from the well.

OH! Yeagh! I forgot to tell you that I’m William O’Brian and I’m nine years old and the year is 1650.

Today was a bit of an odd day, now everybody is talking about this Cromwell guy, I don’t know what the big deal about him is. I mean how strong could he possibly be? Anyway even if my town weren’t strong enough we always have the mighty Aodh Dubh the nephew of Aodh Rua and Aodh O’Neill to help us,

But I still don’t think we need him though!

Earlier on my dad took me out to a place where he handed me a gun that he called a musket.

He spent a good 3 hours teaching me how to use it so I better remember everything he said.

I had to go out again and get more fresh water and other stuff like the chickens too. The bad thing about it is that mom has stopped giving me pocket money, which is too bad because I was really hoping to go and buy some apples with my friends. Cluain Meala is famous for the orchards that grow by the banks of the River Súir.

Bang! Boom! These are the sounds that I heard just 3 hours ago! Cromwell has arrived and he’s firing cannons go leoir at us and I’m actually feeling kind of scared I guess we need Aodh Dubh after all . . . The soldiers he has with him are called Gall Óglaigh, or gallowglasses , which means that they are experienced mercenaries who have served with European armies.

These have been the worst 2 weeks of my life!

Houses are on fire and people are crying.

One of the Elders has died of something called “The Plague”, mother said that it’s a disease that the ‘Round-Heads’ brought to Ireland. There’s nothing good about life right now, and worst of all……….Father has caught the plague!!!!!!

Mother said that he will die before 2 weeks, just knowing that that’s going to happen makes me want to   cry. It’s funny you see, I never really took death seriously. I always heard so many stories where millions died and when someone died it almost became casual to me, I always felt sympathy for the families and went to the funerals but there always a part inside me that almost made me feel bored.

But now that has all changed, now that I finally know what it feels like to lose someone you love, and I know that  millions of families feel this way every time one of these wars that I always here about happens. There’s one thing I will learn out of all of this….. Death is a horrible thing!

This will be my last paragraph for these last 2 weeks and will be about how my dad caught the plague!

The other soldiers say that one of the people on watch had fallen off the watch tower, my dad tied himself to the town walls with only a rope then he jumped off the town walls shot a ‘Round-Head’ in the face. Singlehandedly he picked up the wounded man then got one of Aodh Dubhs soldiers to pull him up, but while he was down there, that’s when he caught the plague.

One more thing, my dad said ……… that …… that….. He said that……when he was on his death bed he said that…. He wants me to kill him with his own musket!  He says this because he doesn’t want anyone else to catch the plague, just why me! I’m sorry if this entry was a little bit too emotional or if it was too much about my dad but anyway, see ya!

UUUUUUUh! I feel like dying right now, as I write this people are crying, people are dying This siege is going from bad to worse and worst of all…

I have caught the plague! It’s not as bad as when my dad had it but unless I get out of this town and manage to get the cure I will… die!  Aodh Dubh has one more plan to defend the town and if that doesn’t work we will have 3 choices we can try to escape at night we can go to Connacht ore we can go to Hell!

Aodh Dubh’s last idea is to take down the town walls at night then to use all those stones to make a maze where the entrance was then when the ‘Round-Heads’ run into the gap in the wall they will find themselves in the maze. When all the hustle and bustle is going on, that’s when Aodh Dubh’s soldiers will fire everything they’ve got at them. What have I been doing these last 2 weeks? Well eventually one of the soldiers had to kill my dad for me I just couldn’t do it!

At least he had a good funeral.

I failed my dad and I don’t intend to do that again,

I’ve managed to grow a bit taller and I turned 10 yesterday so I think I will be able to sneak into the place where you get all the armour and bullets I need but of course I will have to pretend that I’m 14.

I feel awful I’ve been wearing the same clothes for a whole month and a half. But it’s all paid off

Now I can finally get my dad’s musket and shoot some ‘Round Stubborn Iron Whatever You Call Them Heads’. All I have to do now is wait till those ‘Round-Heads’ wake up and realise there’s a big hole in wall! I can manage to sneak my diary in my armour so I can write what the outcome of the fight is on this Friday of all Fridays!

Aodh Dubh has ordered everyone to give up their metal possessions to smelt and make bullets, so that means we will have bullets go leoir to fire with! My friend Jack and his dad Johnathan are the Black Smiths of the town so I think I might just be able to snag a few extra bullets, things are going good and right and I’m actually starting to think that we might actually win this battle after all.

This…… This will be my last entry since I have been mortally wounded in battle. I can barely write these last few sentences. I was shot from one of the maze walls; you see as I was shooting, a ‘Round-Head’ shot me with a kind of musket I have never seen before…… It was covered with the blood the blood of his victims, he was a horrible man! To the way he looked to the way he talked, what do I mean by that well, he kept on shouting “Victory to the Parlementarians” and “Death to the Irish Confederacy”?  This man he was above all others, he was brutal, also I heard someone shouting “Get the leader” pointing to the brutal man that shot me!  I don’t know who it was but I know that if anyone should go to Hell it should be him!

These are my last and finale WORDS!

I have not failed my father as I was courageous and strong SO HEY DAD! SEE YOU IN HEAVEN!

Word from the Mother:

Hello I am the proud mother of William O’Brian, I escaped from Cluain Meala and I had some tough times after that.

After the sieg, Aodh Dubh and I and some other villagers managed to escape it was about 2 days of walking when we all came across “Water-Ford” castle. We knocked on the door; we said that we had come from Cluain Meala we said that it was attacked by Cromwell and that he would come here in 2 days. Even though I was one of the few people who didn’t catch the plague they still didn’t let me in. It was a few days living in the mountains still being chased by Cromwell’s army. Eventually I came to a house, there was a man living there I told him the exact same thing that I told Water-Ford castle, that I had come from Cluain Meala and that it was attacked by Cromwell and his army  .He said that his son had died there fighting I said that my son had died fighting too. I saw bye his face that he felt sympathy for me so he let me in I read Williams diary out loud to him and his daughter. Eventually I asked him where his wife was, he said that she had caught the plague and that she had died 2 weeks before I came.

A few years after that I was still living there, I told stories every night and eventually married him. 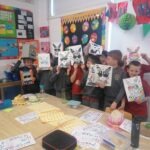 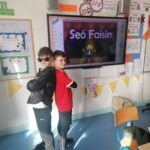